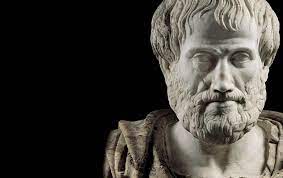 “Aristotle was the unimpeachable authority on every science and art known to his day.” (Maxey)

1.It was the cradle of education in Greece for advanced studies.
2.He was so much influenced by Plato’ teaching.

He served as tutor of Alexander the Great in 343 BC and kept his school in the Lyceum for 12 years. After the death of Alexander the Great, the Athenians revolted and prosecuted the accused persons of whom Aristotle was one of the many. He was charged for impiety but he fled to avoid punishment.

During the middle Ages, he was simply considered “the Philosopher”. The recovery of his manuscripts in the thirteenth century marks a turning point in the history of philosophy. According to Dunning, “the capital significance of Aristotle in the history of political theories lies in the fact that he gave to politics the character of an independent science.”

He is founder of science of logic. His monumental treatise “Politics” is the most valuable works on Political Science. The “Politics” is a chief work on the science and art of Government giving full justification for existing of the institution like the state, slavery and family is calculated to suggest the remedies for the ill of the body-politic of the city-state. Though it is generally said that “Politics” is an unfinished treatise and often obscure but the half understood words of Aristotle have become laws of thoughts to other ages.

Zeller says, “Politics of Aristotle is the richest treasure that has come down to us from antiquity, it is the greatest contribution to the field of political science that we possess.”

Aristotle as Father of Political Science

The title of fatherhood of Political Science bestowed upon Aristotle is not without justification. He was brought up in the order of medicine as his father was a physician of the king of Macedonia. Since his childhood he got every opportunity and encouragement to develop a scientific bent of mind. Instead of turning towards literature like his great master Plato, he built the terminology of science and philosophy.

In the words of Renan, “Socrates gave philosophy to mankind and Aristotle gave science to it.”

Aristotle gives us definite and clear-cut dogmas, instead of groping in illusions and imaginations. He does not believe in abstract notions of justice and virtue, but has a concrete approach. He discarded utopian philosophy of Plato and advocated logical and scientific theories based upon realism. Aristotle supported the principle of unity through diversity. He was of the view that reality lay in the concrete manifestation of things. He separated ethics from politics.

We can say that Aristotle laid the foundation of a real political science by his keen and practical political approach and systematic treatment of the subject. He may be called the “Scientist of Politics” because of his empirical study. He collected his data with care and minuteness, clarifies and defines it and draws logical conclusions which deserve nothing but admiration and praise.

50 ASEAN Excellence Scholarship at The University of Newcastle, Australia 2023